So..the ‘Beast from the East’ is here, there is horizontal snow and negative degrees. Outside there is a 10 day old lamb, taking sups from his mum regularly. This is not a shock to him, he was born in the snow! 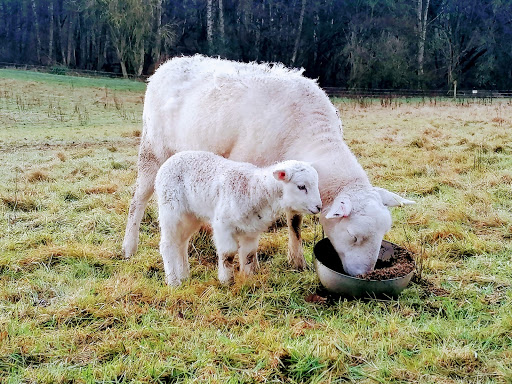 Our flock of Easycare sheep are outdoors all year round, our farm has no large buildings to use as winter housing, in fact we have only just put up a field shelter for them last week. The shelter was made from second hand pallets and put up by Jon and our volunteer and customer Phil, in one day. 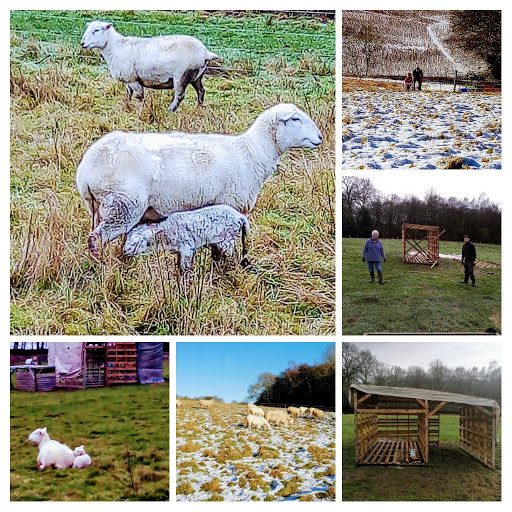 There is a space to keep hay, sawdust and straw dry and a pen next door with the minerals and salt licks for the sheep and where they can stay if we need to keep an closer eye on them. Luckily, the sheltered sides are on the east and west of the shelter so blocking the wind from those directions. We like the fact that they are manuring the field all year round, they can keep more healthy as they are moved to new ground, but we still haven’t managed to cut and save our own hay to supplement the grass over the winter as we have no equipment and nowhere to store it safely. 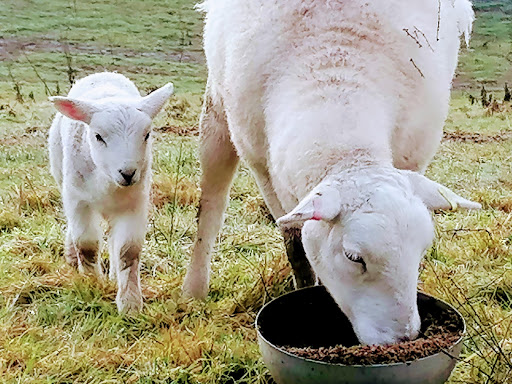 These sheep give birth so easily! Blink and you miss it. It is the bonding process afterwards that they needed help with last year when they were new mums. We aim to trust and support the sheep in a very hands off way, but intervene only if totally necessary.

We moved them into the field in front of the office so that we can see them out the window at close range to make regular observations. This is essential, when we are also caring for our children and its too cold to spend long amounts of time outside.

Firstly was unexpectedly early, we knew it was possible because the ram had been with the flock all year. Sheep gestate for 5 months minus 5 days, so the lamb was conceived in late July. One ewe, ‘auntie’, didn’t get pregnant the year before, so it could be her, the others still had their lambs with them until September. We had thought they would come into season in November but have found out that they start coming into season as the days get shorter. We only keep one ram so if we moved him, he would have been on his own for 6 months which doesn’t seem fair. Next year we may try to separate him off with the young males until November.

It is a bit risky, the lambs being born so early in the cold, if they don’t manage to drink some of the fatty colostrum and milk from the mum within minutes of being born, they will get hyperthermia.

They can’t raise their bodies and heads high enough, the mum keeps walking off, they are a bit dazed, they can’t find the teat, they don’t have a strong enough sucking reflex, the teat is blocked, or the mum hasn’t bonded and pushes the lamb away with her head.

So all those reasons can come between life and death for the lamb. In warmer weather they have up to 12 hours to suckle before they would be in danger.

So we look out for the following signs of lambing :

Separating from the flock,

Walking in circles and looking at her back end,

Standing up and lying down.

We know what we need in our lambing kit this year:

Scissors and iodine to cut and spray umbilical chord.

Sheep paint spray to number them as they lamb.

Herbal treatments we have used

Now there are 4 lambs in the field. One was born in minus 8 degrees! He just started feeding and walking straight away. The flock are now using the shelter and we are supplementing with beet and hay. We have helped one ewe to bond and found one poor lamb ‘born in the bag’. The bag didn’t break when he was born so he couldn’t breathe. They seem to be lambing at around 6.30am, which is just before sunrise.

11 Lambs have just been born in a 36 hours period! From 5 ewes. I am knackered. Jon and myself had to ask for some emergency childcare as we staggered from one birth to another, penning the ewe and lambs in the field, checking health and suckling and giving water and beet. There was one set of triplets and the rest twins. Unfortunately a few of the lambs were not getting any colostrum as they couldn’t couldn’t suckle properly so we walked around every two hours throughout the night feeding a colostrum mix from the bottle. We had a scoreboard on the office wall to help us know who needed extra what. We slept about two hours each and then had a nap the next day. Sadly, one of the triplet (the first born and biggest!) didn’t survive and one of the twins from the Ewe we know has a blocked bag. Its really hard to find the balance between keeping them alive so they get a chance to learn the ropes but not adopting them. We realised soon after that it was exactly 145 days (the gestation time of sheep) since the last years lambs had been taken to market, so we could have predicted this if we had understood sheep behavior better.

There are now 17 lambs in the field and lambing is over for this year. Phew! I’m so impressed with Jon’s animal husbandry. Those ewes were so healthy and well looked after and nourished that they all had twins or triplets and there were only 4 losses. From an extensive method like ours and with our little experience, I think this is something to be really proud of. We were still on the phone to Pete Geyre (our sheep guru) and on the ‘ladies who lamb’ facebook group asking for advice at odd hours. You learn something new every year I guess. But now we know how hardy this breed is, we may continue lambing in late winter/early spring. It means that intensity of care is finished before the intensity for seedlings in the garden is needed!